Rhinitis is the leading cause of respiratory obstruction1 and a significant contributory factor to numerous cormobid disorders, including dentofacial and craniofacial alterations.2,3,4

The most common treatment for rhinitis includes avoidance, decongestants, corticosteroids or allergy shots, and while these offer therapeutic benefit, they are effective only for as long as treatment continues.

A different perspective put forward by the late Russian Dr Konstantin Buteyko is based on the premise that breathing a volume of air in excess of metabolic requirements causes nasal congestion. Upon the first onset of nasal congestion, a feeling of air hunger occurs causing one to switch to mouth breathing. This in turn increases breathing volume, thus completing the vicious circle.

The Buteyko Method features a measurement appraisal known as the control pause, a breath hold exercise to unblock the nose and reduced breathing exercises to reset breathing volume towards normal.

The objective of a study undertaken by Dr Adelola et al. from the Department of Otolaryngology at Limerick University Hospital in Ireland was to investigate the effectiveness of the Buteyko technique on the nasal symptoms of patients with asthma.

26 volunteers with a diagnosis of asthma and chronic rhinitis, ranging in age from 23  60 years were recruited from the general population. Training took place weekly for three weeks by Buteyko instructor; Patrick McKeown. Participants were followed for three months. A number of researchers have determined an inverse relationship between length of breath hold time and breathing volume.7,8,9 The measurement below was developed by the Late Russian Dr Konstantin Buteyko and is known as the  control pause. A low control pause is indicative of higher ventilation during rest, resulting in rhinitis symptoms for those genetically predisposed. From measuring the breath hold time of thousands of individuals over the past twelve years, I have consistently found that rhinitis symptoms including nasal congestion, runny nose and post nasal drip are greatly reduced when the control pause is greater than 25/30 seconds. Furthermore, each five second increase to the control pause corresponds to reduced rhinitis symptoms. 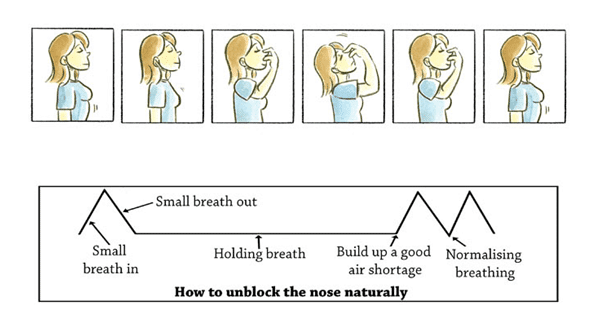 The nose can be decongested for both allergic and non allergic rhinitis by holding the breath as follows:

The Buteyko Method offers a therapeutic intervention for rhinitis and allergic rhinitis. The study showed a significant improvement in nasal symptoms of asthmatics, and quality of life of participants. Further research is necessary to establish the effectiveness of the Buteyko Method for chronic rhinitis.

3) S. Linder-Aronson, Adenoids: their effect on mode of breathing and nasal air?ow and their relationship to characteristics of the facial skeleton and the dentition, Acta Otolaryngol. Suppl. 265 (1970) 1-132.